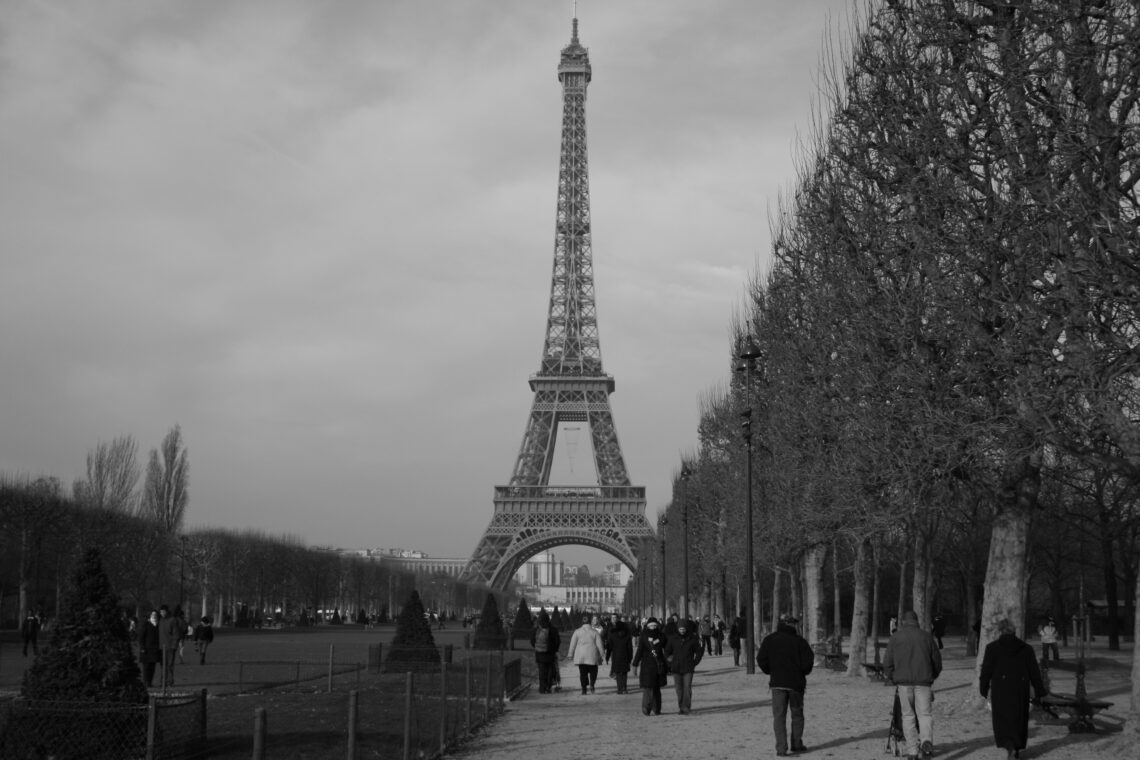 Some cities don’t bore easily and Paris is one of them. I visited the French capitol twice before, in 1996 and 1999. This is the first time, however, that I’m going to visit Paris in winter. It’s the day after Christmas when we arrive at Gare du Nord. This monumental station is an attraction in itself. Outside it is cold (just above freezing) and gray weather. The weather seems to have adjusted to my intention to photograph in black and white only this time.

We spend our first day in Paris strolling down the small streets of Montmartre. As the word ‘mont’ suggests, this neighborhood was built on a hill, from where you have a panoramic view over the city. Via Rue Pigale and Rue de Mogador, we arrive at Boulevard Haussmann. It’s a very busy place, a combination of the evening rush hour and the shoppers that flock to the large department stores Lafeyette and Printemps.

A little further on is the Opéra, a stately building with large golden statues on the roof. The Opéra is located on a busy traffic circle, where two large boulevards meet. It is these and other ‘grands boulevards’ that are typical of Paris, but at the same time contrast sharply with the quiet streets of Montmartre and Quartier Latin.

On day two in Paris we take the metro to Quartier Latin. This is the University district of Paris, where the Sorbonne and the Panthéon are located, and where you’ll find many small streets with cafes and restaurants. In my opinion the Latin Quarter is one of the nicest neighborhoods in Paris. From Place Saint Michel we walk down Rue de la Huchette and via Place Viviani and Rue des Carmes we arrive at to the Panthéon. This impressively large building has a large dome and a facade with immense columns. The remains of the big names from French history are buried inside.

On the other side of Boulevard Saint Michel are the Luxembourg Gardens, a large park with a palace of the same name, which now houses the French Senate. We strol through the park and end up on the other side in Saint Germain, the neighborhood next to Quartier Latin. This is also a nice neighborhood, but the small streets here are filled with expensive shops, boutiques and galleries.

Via Rue Bonaparte and Place Saint Germain des Prés we head for the Seine. From the pedestrian bridge Pont des Arts you have a beautiful view over the river and the southern tip of Ile de la Cité. This island in the Seine is the heart of Paris and the place where the city originated. You reach the island via the Pont Neuf, the oldest bridge in Paris. Via the picturesque Place Dauphine we walk towards Notre Dame. Here it is teeming with tourists.

The Pont Saint Louis connects Ile de la Cité with Ile Saint Louis, the other island in the Seine. Here we walk for a while along the low-lying quays along the Seine. The quays, the bridges and the view are a beautiful and photogenic environment. Late afternoon we take the metro to Les Halles. This largely underground shopping center, and the park of the same name above it, are worth a look.

The next morning the sun is shining when we take the metro to Trocadero and walk to the Palais de Chaillot. From the terraces of this (otherwise not very beautiful) palace you look cross the Seine right at the Eiffel Tower. This world famous steel tower was once the tallest structure in the world. Under the tower there are long lines for the four cash registers, everyone seems to want to go up.

We don’t and continue down the Parc du Champ de Mars, the open pedestrian area at the foot of the Eiffel Tower. From here it is not far to the Hôtel des Invalides, which is particularly notable for its golden dome. In front of Invalides, a wide ‘splanade runs towards the Seine. It is striking how spacious this part of Paris has been layed out. The city architects have created wide boulevards, pedestrian promenades and green belts. Very different from, for example, the nearby Latin Quarter and Saint Germain.

The same openness goes for Place de la Concorde, from where you can see the Eiffel Tower as well as Notre Dame, the start of the Champs Elysées and the entrance to the Jardin des Tuileries. It’s a part of Paris that exudes grandeur and allure in every way.

We walk down the Champs Elysées. The first part has rows of trees and benches on both sides and is a nice pedestrian boulevard. The second part is the part with shops and especially a lot of shoppers. At the end of the Champs Elysées, the Arche du Triomphe inevitably awaits. The cars race across the roundabout that surrounds the arc and leave you wondering how it’s possible that no accidents occur.

At Place de la Concorde is also the entrance to the Tuileries, which is called ‘jardin’ (garden) in French, but has more of a park. At the end of the park is the world-famous Musée du Louvre. This immense museum is impressive from the outside alone. The combination of the old wings on the Cour Napoléon with the modern glass pyramid in the middle is as special as it is beautiful.

On our last day in Paris we take the metro to Louvre-Rivoli, we first walk past Palais Royal. The building is beautiful, but the best part is the garden behind this former palace. Amidst the wings of this classical building are modern art objects. They contrast sharply and make for nice pictures.

Near Palais Royal we walk down some old passages, the somewhat deserted Galerie Véro-Dodat and the more beautiful Galerie Vivienne. After this it’s time to head towards Gare du Nord to take the train back home. Paris in winter time was cold, but pretty as ever. 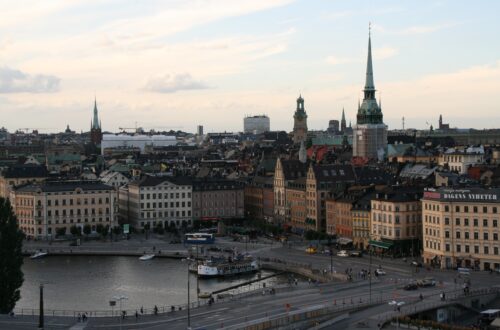 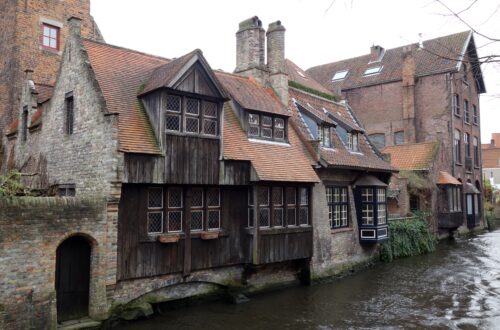