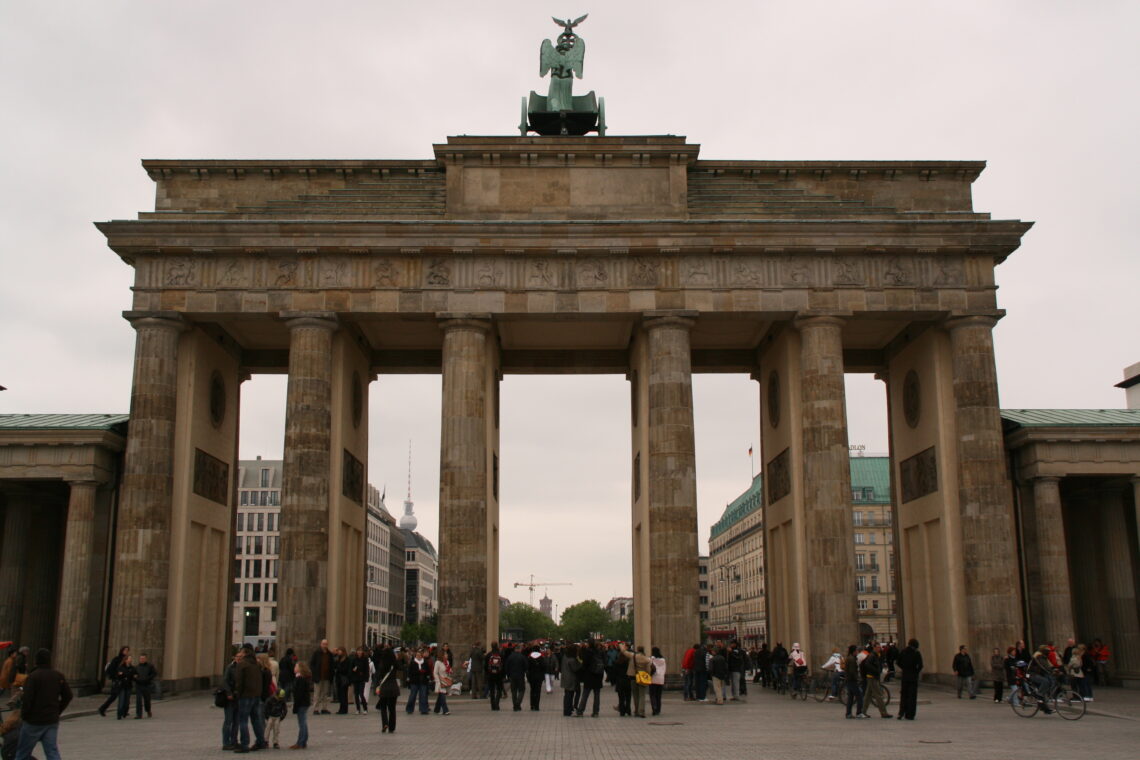 If you depart from Amsterdam Airport just before 7 a.m. you have to get out of bed at 3 a.m.. A bit early if you ask me. I’m not fully awake yet when we are on the train to the airport. Two hours later our plane leaves for Berlin. We arrive at Tegel Airport, on the north side of the city. Berlin has a good metro network, but from Tegel there are only buses to the city. We buy a public transport card that gives us unlimited public transportation for five days. In twenty minutes the bus takes us to Kurfürstendamm, the long and wide shopping boulevard in the center of the city. Our hotel is located in the Lietzenburgerstrasse, which runs parallel to the Kurfürstendamm. We leave our luggage at the hotel and go to the ‘Ku’damm’ in search of coffee. Soon we walk past the Kaiser Wilhelm Gedächtniskirche, the church that was built at the end of the nineteenth century and was badly damaged in a bombing raid during the Second World War. The ruins of the church have been preserved as a symbol of the ravages of the war.

After we had coffee and are a bit more awake, we take the metro to Potzdamerplatz. At the time when Berlin was divided into East and West Berlin, this centrally located square was an abandoned area because the wall was here. After the reunification, modern office buildings and a new metro station were built around the square. The large office complexes show the new, modern Berlin. On Potzdamerplatz itself, a second-hand market is going on, where you can buy, amongst other things, memorabilia from East Berlin. It’s an expression of what is called ‘Ostalgie’, nostalgia for the old East Germany. The popularity of ‘der Ampelmann’, the green man on the East German traffic lights (which now even appears in the former West Berlin), is an example of this.

From Potzdamerplatz it’s only a few hundred meters to the Holocaust Memorial. Unveiled in 2006 to commemorate the Jews who were murdered in the Second World War, this memorial consists of over 2,700 solid gray stone blocks, closely spaced. You can walk between them and as you walk further to the center, the blocks get higher and you walk in a kind of maze with high gray walls. Quite remarkable.

A little further on is the icon of Berlin: the Brandenburg Gate. Built in 1791, for more than three decades the Brandenburg Gate stood right next to the wall that divided Berlin in two. On the east side to be exact. It is a beautiful, stately city gate. But one that for a long time could only be seen from the west from an observation point near the wall. A gate that gave access to nothing. It is very busy around the Brandenburg Gate and in the Parizer Platz, the square on the east side of the gate. On the other side of the square begins Unter den Linden, perhaps the most famous street in Berlin.

A little further on we walk into a side street. A parking lot between apartment complexes marks the spot where until 1945 Adolf Hitler’s bunker was located. In this large underground bunker complex, with walls three and a half meters thick, Hitler lived during the last years of the Second World War. While the Allies invaded the city, Hitler continued to give orders from here to defend the city to the bitter end. In vain. It was also here that he married Eva Braun and on April 30, 1945 committed suicide, together with Braun. Now only an informative sign reminds of what took place here more than half a century ago.

We have lunch in a restaurant on Unter den Linden. This wide boulevard is named after the trees on either side of the pedestrian promenade in the middle. In the summer you can stroll here, sit on a bench in the sun or drink coffee at one of the many kiosks. It’s not really weather for that now. It’s cool and cloudy, but fortunately dry. Halfway through Unter den Linden we walk to the right towards the Gendarmenmarkt. A beautiful square with the Französischer Dom on one side and the Deutscher Dom on the other, both classical buildings with imposing domes. In between is Berlin’s concert hall.

Via the Ministry of Foreign Affairs, which, in addition to being housed in a modern new building, is also partly located in the former headquarters of the East German Socialist Unity Party (SED), we return to the other side of Unter den Linden. Here we walk along the Neue Wache, which serves as a monument to all German war victims.

The next morning we take the metro to the Brandenburg Gate station. Near the gate is the Reichstag. In 1933 this nineteenth century building was set on fire by the Dutchman Marinus van der Lubbe, who hailed form my hometown of Leiden. The fire in the Reichstag was one of the reasons for Hitler to dissolve the German parliament and take power. It would prove to be a significant step on the way to the Second World War. After the war, the badly damaged building was restored, but without the dome that had adorned the old building.

When the German government decided after reunification that Berlin would once again become the seat of government, the Reichstag was renovated and fitted with a modern glass dome. New, sleek government buildings were erected next to the Reichstag, along the River Spree. The modern architecture of the dome and the new buildings contrasts sharply with the classical building. Outside the Reichstag, a huge line of people is waiting to visit the glass dome. Based on the length of the queue and the pace at which it (not) moves, we estimate the waiting time at least two hours. We decide to come back at a later time.

We walk to Potzdamerplatz and from there via Stresemannstrasse to Niederkirchenstrasse. Here we follow the route where the wall once stood. The exact location of the wall is marked with boulders in the road surface. It’s a strange idea that you can see that the buildings on one side of the street were in West Berlin and the other in East Berlin. The wall ran across the middle the street here. In Niederkirchenstrasse there is a section of the original wall, about one hundred meters long. Next to it is the Topography of Terror, a museum about the Nazi regime.

And a little further is one of the most famous sights of Berlin: Checkpoint Charlie. This is one of the few places where before 1989 you could travel from west to east Berlin. Provided you qualified. For residents of East Berlin, passing the border post was out of the question. Some tried to cross the heavily guarded border with fake papers or risked their lives by sneaking through the Iron Curtain at night. Only a few succeeded, the rest were killed or captured. The escape attempts have been documented and can now be seen in the Mauer Museum located at Checkpoint Charlie.

In the afternoon we walk towards the Tiergarten. This is the great green lung of Berlin, a large, beautifully landscaped park. The Tiergarten is bisected in the middle by the Strasse des 17 Juni (two times three lanes, so not a small road), but despite the noise of the traffic you can enjoy a walk here and lie on the grass in the summer when the weather is nice.

The next day it’s gray and wet outside. We decide to do something indoor: visit the DDR museum. This museum, which is small and very busy, paints a picture of daily life in former East Germany. Many everyday things and consumer items from that time were not even that much different than in the west. But the whole organization of society was completely different: a state-regulated market, children joining the youth wing of the SED from an early age, state-organized vacations (in a limited number of Eastern European countries and Russia) and state-controlled newspapers that all wrote the same things. And citizens who lived with the constant fear of being under the control of the secret service Stasi.

Next morning morning we take the metro to former East Berlin and walk through the eastern part of Kreuzberg. The old quarter, with lots of graffiti and satellite dishes, looks a bit run down. An old watchtower still stands in a small park near the river Spree. Such watchtowers were placed every three hundred meters along the wall to prevent people from fleeing from east to west. We cross the river where on the other side is a part of the original wall. Called the East Side Gallery, this piece features murals, some from when the wall was the boundary, others added afterwards.

The Karl Marx Allee was the main street in East Berlin. This wide boulevard has identical apartment complexes on both sides in typical Eastern European architecture. It’s Sunday and very quiet in the street. The Karl Marx Allee ends (or begins?) at Alexanderplatz. This square is dominated by a large shopping center, a metro station and an underground car park under construction. On the other side of Alexanderplatz is the building that you can see from almost anywhere in Berlin: the Fernsehturm. The 365 meter high concrete colossus, with the characteristic metal sphere, was built in the 1960s and dominates the skyline of Berlin. Nearby we also find the statue of Karl Marx and his student Engels as well as the Berliner Dom.

After lunch, we continue towards the Neue Synagoge, which was set on fire during Kristallnacht, and was completely restored to its original state after the war. Its dome can now be visited. After this we go to the Gedänkstätte Berliner Mauer. Here in the northern part of Berlin, part of the wall has been preserved, including the second wall and the piece of no man’s land, the ‘death strip’, in between, including watchtower. This is how the border actually looked for more than three decades. All across the city.

In the course of the afternoon we are back in ‘mitte’, the center of the city. A visit to Berlin is not complete without the famous Berliner currywurst. So we have one at Unter den Linden, with a view of the Brandenburg Gate. A prime location. The sun has now broken through. We do one more thing this afternoon: the queue for the Reichstag has not been this short in three days, so we decide to visit the dome. The queue and security check last fifty minutes, after which we enjoy the fabulous view over Berlin from the roof of the Reichstag. In the glass dome you walk up a spiral path. A beautiful piece of architecture and a great view!

The last day in Berlin we take it easy. We visit Schloss Charlottenburg, a large seventeenth century palace with a large park, where we walk for an hour and lie on a bench in the sun. In the course of the aftrenoon we leave for Tegel Airport for our flight home. At that time we do not yet know that Amsterdam Airport has been shut down for a couple of hours due to the ash cloud caused by a volcano in Iceland. Our flight is therefore delayed by two hours, so that we only land at Amsterdam Airport after midnight. But we had a very nice city trip. Berlin is a relaxed city with lots to see. Definitely worth a visit! 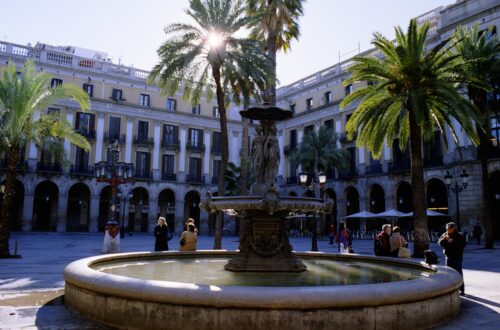 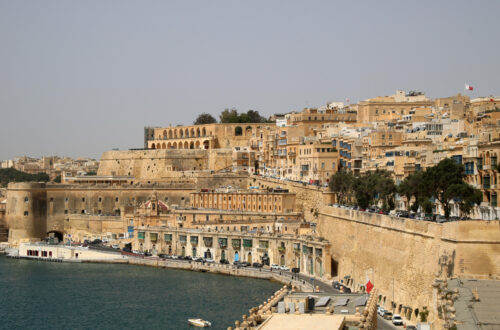 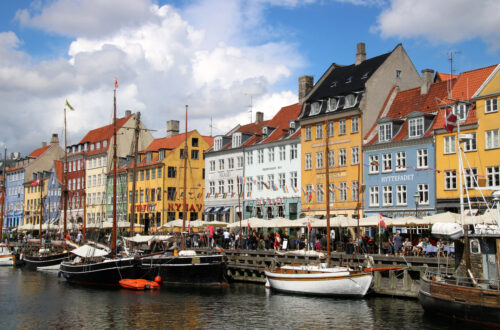